These past two weeks have been what I commonly refer to as a 'fieldwork bubble' where the rest of the world falls out of my purview and my only focus is the project at hand. I have been down in the Florida Keys with a group called Diving With a Purpose (DWP) (referred to in this post) and the National Park Service Submerged Resources Center.

In 2011, I met the Founder of DWP, Ken Stewart, on a boat in the Atlantic Ocean side of Cape Town, looking for a shipwreck with the Slave Wrecks Project. DWP is a maritime archaeological advocacy course. We annually take a team of lay divers to document shipwrecks for the National Park Service (usually in Florida) where I am a DWP Maritime Archaeologist and Head of the DWP Research team. When Ken and I met, we immediately discovered our mutual goals of bringing the knowledge and preservation of underwater cultural resources to young people, so we helped create Youth Diving With a Purpose (YDWP), and had our inaugural session last July 2013.
YDWP is aimed at students who come from diverse communities but have been fortunate enough to learn how to scuba dive (either in school or from the help of some of our mentors). Our students represent an array of diverse communities from around the States and globally. The program is constructed to supply the young lay-diver (high school age) with knowledge to become underwater advocates for conservation and preservation through the pursuit of maritime archaeology. YDWP is a weeklong program teaching the basic skills of maritime archaeology in the Biscayne National Park, with the option for three-year renewal to become a DWP instructor in the adult course (two sessions in Florida and third session in Mozambique, Africa). The development of our youth component is a way for DWP to inspire the next generation of youth divers and give them solid maritime leads for their higher education and career goals. 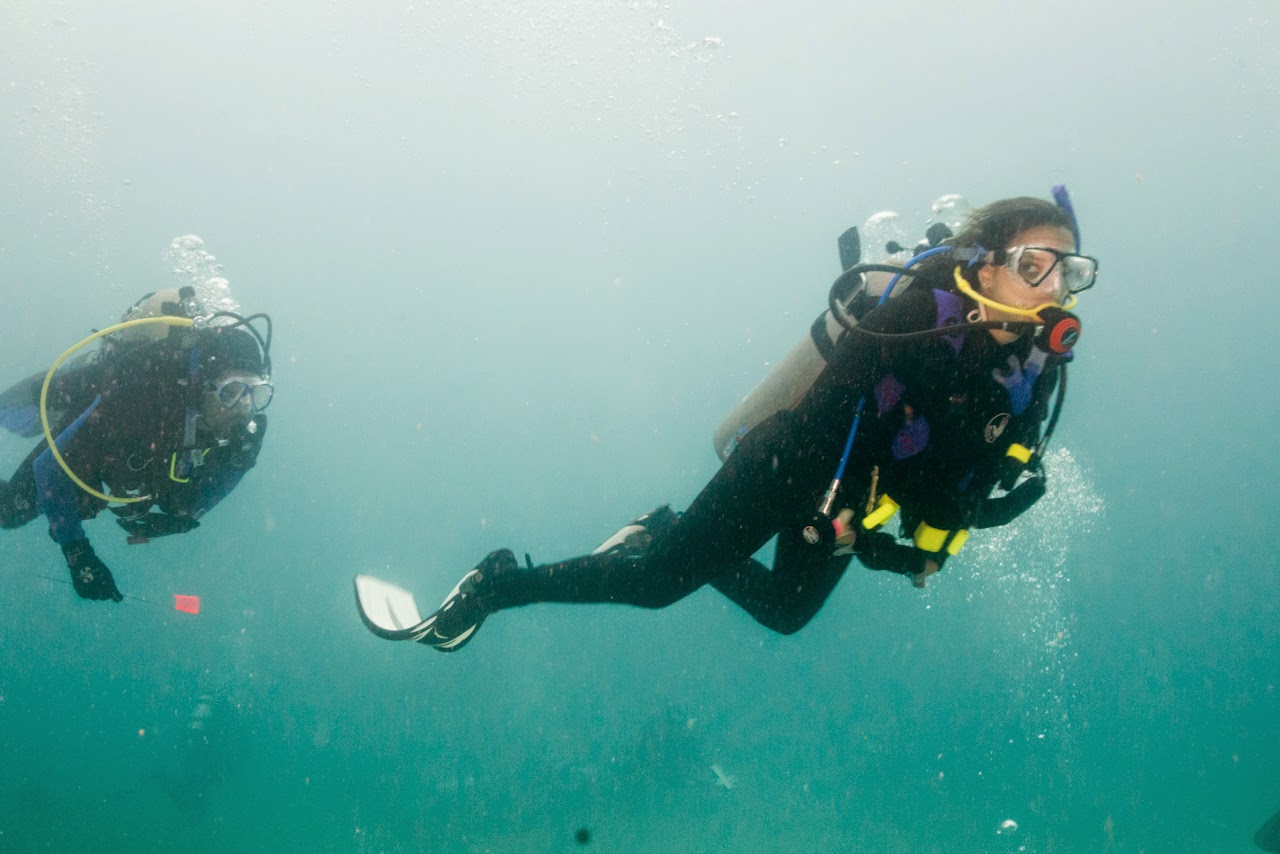 YDWP offers what other similar youth outreach programs cannot- that is a chance to take diving youth from diverse communities and actually get them in the water consecutively for years to come. Not only have our students fine-tuned their scuba skills, but they have been immersed in the fairly new scholarly pursuit of maritime archaeology. Maritime archaeology is only just becoming well known amongst the broader community of terrestrial archaeologists. As such, diversity is under-represented in this professional sphere, and YDWP aims to change those figures by teaching our students the necessary skills to become successful candidates for university programs and professional fellowships in maritime archaeology or similar subjects. Already our older students are off to pursue marine majors at universities around the United States this coming fall (Texas A&M, University of Miami, PennState, etc..). Our record of accomplishment as professionals, divers and mentors, all of whom are unpaid dedicated volunteers, are helping inspire the next generation of divers and scientists and giving them concrete ways to get there. Through YDWP mentorship, the students will develop their goals for their futures, gain a greater appreciation for the oceanic environment and the cultural heritage that is threatened on a daily basis. They will take this knowledge with them into their communities at home, at school, and when they enter the workforce. 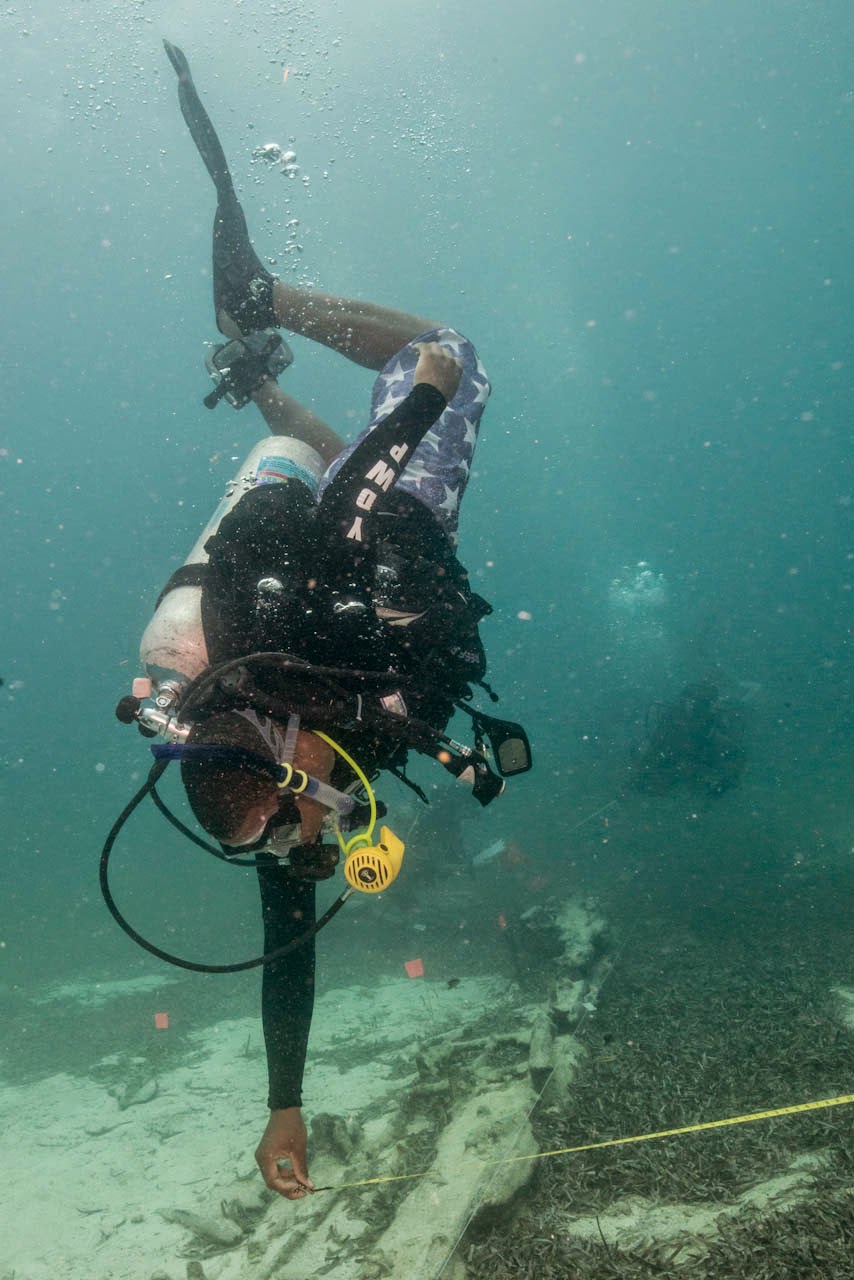 So for the last few weeks, I have been spending my time with this fantastic and successful group of high school and young college students. The course is divided up by different teaching focuses on the tenets of maritime archaeology. The first day is full day of presentations about the NPS, the Slave Wrecks Project, and the skills/wreck that we will be working on for the project. This is followed by an intensive afternoon of setting up a mock shipwreck and working on the skills we have just gone over. The next two days are typically boat days, where we are on the wreck doing a full survey, setting up the baseline, doing offset points, doing trilateration mapping, and in-situ drawings of artifacts/features on the site. Then we normally have a day back on land to reflect and discover any measurements or drawings that need to be retaken/redrawn. This year we had the boat three days in a row however, so we didn't get to do as much on land mapping to create a composite site map (usually the final product), because we had a community service project up in Delray Beach, Fl. The community service aspect is an important part of our YDWP outreach, to engage local kids to becoming more interested in underwater cultural resources but also in the big blue ocean that is in their backyards. 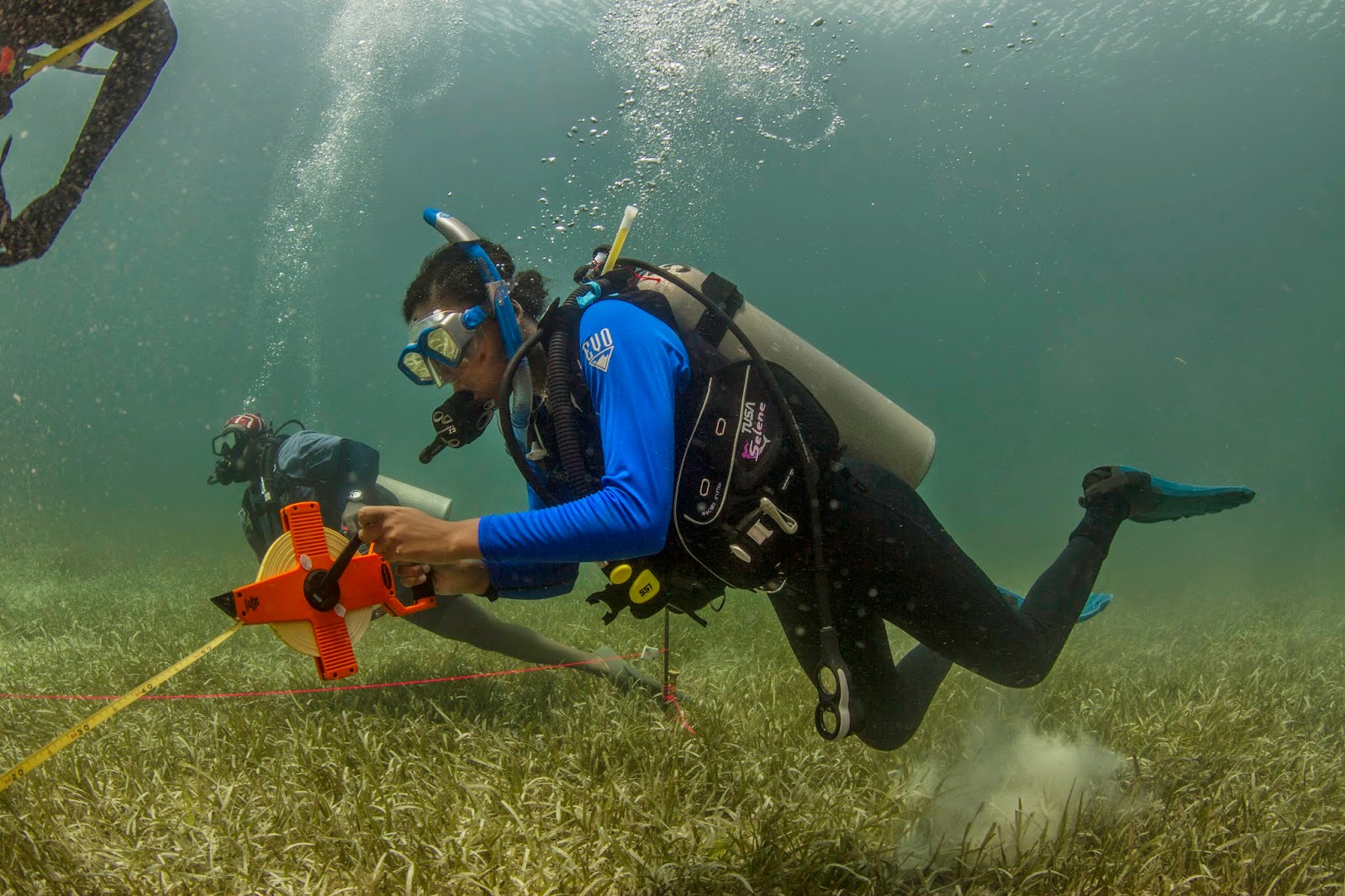 Every time I see our group of students, which for some is often throughout the year, I become more proud and in awe of their accomplishments and motivations to overcome their individual challenges. It sounds incredibly cliché to say all of these things but I have become all the more motivated for my own professional and personal goals, just by spending time with them. The connection that the mentors and mentees have at YDWP is one that I find unmatched in most other situations that I find myself working, and I am sure that can be said for most in the program. In my experience, it isn't typical for an archaeological project to have such a real world impact on young people's lives, so for me, this goes far and above typical fieldwork experience and I greatly look forward to many years as a YDWP mentor and friend.

Here is an update to my post about Barry Clifford, the treasure hunter who discovered the Whydah and 'discoverer' of what he believes to be Christopher Columbus' flagship, the Santa Maria.

This post is also featured on The Antiquities Coalition blog posted on Monday, July 14th 2014.

On July 7, the Haitian Minister of Culture, Monique Rocourt, publicly stated that the Haitian Government has revoked the permit of famed treasure hunter Barry Clifford's on the alleged Santa Maria site. When the discovery news first went public back in May 2014, UNESCO was asked for Minister Rocourt also pointed out that although Clifford had announced to the public that he had discovered this site, it had actually previously been studied by the University of Florida back in the 1970s-80s. Maritime archaeologists – trained academics and scientists - who don’t harbor the same focus on profit and fame over proper research, would have done their due diligence by conducting a full research analysis and likely have left Christopher Columbus out of the equation, until there was concrete proof of this allegation.

As to the 'state of emergency' invoked by Clifford concerning this site, the Haitian Government and UNESCO have also rejected this claim, as the wreck remains protected by the natural elements and sediments, meaning immediate danger is not imminent. Doing a full excavation would do more harm than good in both the short and long term. The Council has cautiously recommended that some archaeological fieldwork will continue on this site but only under the auspices of UNESCO's technical assistance. Their team will likely survey the site in August of this year.


This is an example of what many maritime archaeologists face - their efforts are not only focused on research but on struggling to counteract the claims and extensive financial flows of treasure hunters worldwide. It is governments in the developing world that need to recognize the difference between claims of grandeur and hard scientific fact. Even small decisions to restrict actions by alleged archaeologists; help foster a scientific and knowledgeable environment.
This situation becomes even more interesting beyond the Santa Maria discovery. A simple news search shows that media coverage of this decision has only been covered by Haitian or foreign language media outlets. Once the initial announcement via the mass media was released in May to the American press, there has been little to no coverage of these developments since May in English-language outlets.


This illustrates a trend in American sensationalist media where only the exciting or provoking news is made public, while the follow-up stories that are grounded in reality, are forgotten or dismissed. If the American public were able to know about why Clifford's permit was revoked or why treasure hunters and archaeologists are ethically at odds, it would foster a new thoughtful perspective on cultural resources management and site preservation. The media is an integral part in spreading awareness of issues surrounding our cultural resources.
their technical assistance to determine the validity of Clifford's claims and assess his permit and archaeological methods. UNESCO has since determined that the methodology and diver team employed by Clifford does not comply with the standards set by the Scientific Council of the UNESCO Convention.

Revising Antiquities Laws- Does it Put a Stop to Illegal Looting?

There are many outdated laws and regulations concerning heritage and site protection around the world. However, with their recent change in government, India has recognized the necessity of revisiting their cultural resources legislation. The Archaeological Survey of India (ASI) has decided to push for an update to their 1972 Antiquities and Art Treasures Act (AAT). In their belief, this Act has encouraged illegal looting of Indian antiquities and has made it more difficult for legitimate persons/dealers to obtain licenses for private antiquities ownership. While there is no ban on private ownership of antiquities, one must still obtain a license/submit registration to own them. The ASI has argued that if the law is updated, the black market for illegal items will slow down, bringing more transparency to their legal domestic trade.

The ASI has previously attempted to change the law to be more compliant with their view, but so far their efforts have been stonewalled. If the ASI were in fact able to pass a new Act or an updated version, does this actually indicate that illegal looting will subside? Or, will it merely make it easier for those persons who already want to abide by the AAT law to comply, and not in fact dissuade those looting for subsistence or other fraudulent reasons? It isn't inconceivable that once registered, these items, because of their new transparency to the government and other dealers, will become targets for seizure by the state or museums. In that same vein, people may be persuaded by the availability of permits and amplify their search for archaeological sites and artifacts.

To be clear, I am certainly not arguing that the ASI should not attempt to update these laws- this law created in 1972 must be revisited by Indian lawmakers and heritage managers. However, I play the devil's advocate when I question whether or not this will in fact make a marked improvement on looting in the country. Perhaps an educational component about the economic incentive fueled by cultural tourism, in addition to the mere redrafting of legislation, would encourage those Indian citizens to become stewards of their own heritage, instead of incentivizing them to own/sell.
Posted by Unknown at Wednesday, July 02, 2014 No comments: